How to improve the quality of nylon injection moulded parts?

I. Ensure drying effect
Nylon absorbs moisture easily and will absorb atmospheric moisture if exposed to the air for a long time. If excessive moisture is absorbed before injection moulding, the appearance and mechanical properties of the part will be damaged.
At temperatures above the melting point (approx. 254°C), water molecules react chemically with nylon. This chemical reaction, known as hydrolysis or cracking, causes oxidation and discolouration of the nylon, a relative reduction in the molecular mass of the resin and its toughness, and an increase in fluidity. Not only does this cause processing difficulties, but it can also damage the performance of the part. The nozzles salivate during injection moulding and the parts have severe flying edges.
The moisture absorbed by the plastic and the gas from the cracking, together with the clamped parts, the light in the surface formation is not polished, silver lines, spots, micropores, bubbles, heavy melt expansion can not be formed or molding after the mechanical strength significantly reduced.
Finally, after this hydrolytic cracking of nylon, its performance is completely irreducible, even if it will be re-dried, it is impossible to use again.
To sum up, the drying of nylon material before injection moulding must be taken seriously, to what extent it should be dried is determined by the requirements of the finished product, usually below 0.25%, preferably not more than 0.1%, as long as the raw material is well dried, injection moulding is easy, and the parts will not bring many troubles in quality.
Nylon is best dried under vacuum, because the temperature conditions of atmospheric drying are high, the raw material to be dried still has the possibility of oxidation and discolouration due to contact with oxygen in the air, excessive oxidation will also produce the opposite effect, making the parts brittle.
In the absence of vacuum drying equipment, only atmospheric pressure drying can be used, although the effect is poor. There are many different atmospheric pressure drying conditions, here are just a few.

The fourth is to raise the temperature to more than 100 ℃, or even 150 ℃, that is because the consideration of nylon exposed to the air for too long or by the drying equipment running ineffective.
The fifth is hot air hopper drying for injection moulding machines, where the temperature of the hot air passing into the hopper is raised to no less than 100°C or higher to allow the moisture within the plastic to evaporate. The hot air is then carried away along the top of the hopper.
Which drying conditions are implemented depends on the drying effect. Too low a temperature results in long drying cycles and poor efficiency; too high a temperature may result in the condensation or cross-linking of the plastic, resulting in higher melt viscosity during processing.
The vacuum dehumidifier is an airtight structure that extracts the water vapour from the plastic while heating it internally, so there is no need to raise the drying temperature particularly, and the drying time can be shortened considerably.
If the dried plastic is left in the air, it will quickly absorb moisture in the air and the drying effect will be lost. Even in the covered hopper, the storage time should not be too long, generally not more than 1h on rainy days and limited to 3h on sunny days.

Ⅱ, control the barrel temperature
Although the melting temperature of nylon is high, when the melting point is reached, its viscosity is much lower than that of general thermoplastics such as polystyrene, so the liquidity is not a problem when forming.
In addition, because of the rheological properties of nylon so that the shear rate increases when the apparent viscosity decline is not outstanding, coupled with the melt temperature range is narrow, between 3 ℃ ~ 5 ℃, so the high material temperature is a guarantee of smooth filling the mould.
However, the thermal stability of nylon in the molten state is poor, processing too high material temperature and too long heat time may lead to the degradation of polymers, so that the parts appear bubbles, strength decline.

Ⅲ, improve the equipment components
First of all, in the case of the barrel, although there is a large amount of material forward when injecting, but the molten material in the screw groove backflow and leakage between the threaded end surface and the inner wall of the inclined barrel also increases due to the large liquidity, the result is not only to reduce the effective injection pressure and the amount of material supplied, and sometimes also to prevent the smooth progress of adding material, so that the screw slipping can not be backed up, so the front end of the barrel must be equipped with a check ring to prevent backflow. However, after installing the check ring, the material temperature should be increased by 10℃~20℃ accordingly, so that the pressure loss can be compensated. 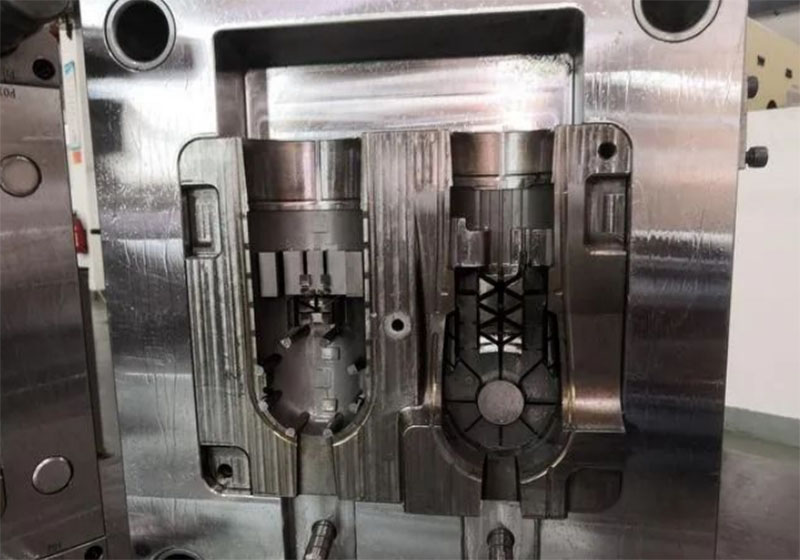 Next is the nozzle situation, after the injection action is completed and the screw is returned, the molten material in the front furnace may flow out from the nozzle by itself under residual pressure, which is called “salivation phenomenon”.
If the salivated material enters the cavity, it will make the part with cold material spot or difficult to fill, if the nozzle against the mould before the removal, and greatly increase the operational trouble, the economy is also not cost-effective.
A separately adjustable heating ring on the nozzle is an effective way of controlling the temperature of the nozzle, but the fundamental solution is to replace the nozzle with a spring-loaded orifice nozzle with a flow-stopping structure.
Of course, the spring material used in such nozzles must be resistant to high temperatures, otherwise it will be repeatedly annealed under high temperatures due to pressure and loss of elasticity.
Fourth, to ensure that the mold exhaust and control the mold temperature
Because of the high melting point of nylon, in turn, its freezing point is also high, into the cold mold of molten material at any time because the temperature drops below the melting point and solidification, preventing the completion of the filling action, so the high-speed injection must be used, especially for thin-walled parts or long flow distance of the parts.
In addition, high-speed mould filling brings a cavity exhaust problem, nylon moulds to have more adequate exhaust measures.
Nylon requires a much higher mould temperature than thermoplastics in general. Generally speaking, a high mould temperature is beneficial for flow. This is particularly important for complex parts.