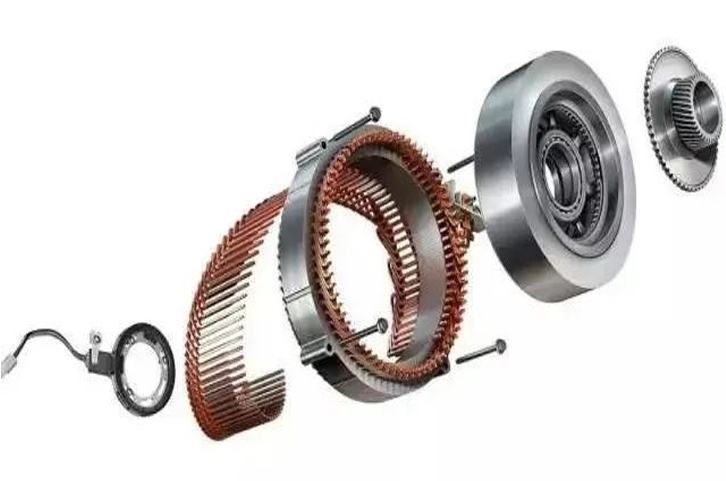 Permanent magnet ferrite material: In the 1950s, ferrite began to flourish. Especially in the 1970s, strontium ferrite with better performance in coercive force and magnetic energy machine was put into production in large quantities, and the permanent magnet ferrite was rapidly expanded the use of. As a non-metallic magnetic material, ferrite does not have the disadvantages of easy oxidation, low Curie temperature and high cost of metal permanent magnet materials, so it is very popular.

Samarium cobalt material: a permanent magnet material with excellent magnetic properties that emerged in the mid-1960s and its performance is very stable. Samarium cobalt is particularly suitable for the manufacture of motors in terms of magnetic properties, but due to its high price, it is mainly used in the research and development of aviation, aerospace, weapons and other military motors and high-performance motors in high-tech fields where price is not the main factor.

NdFeB material: NdFeB magnetic material is an alloy of neodymium, iron oxide, etc., also known as magnetic steel. It has extremely high magnetic energy product and coercive force, and at the same time, the advantages of high energy density make NdFeB permanent magnet materials widely used in modern industry and electronic technology. It is possible to reduce the size, weight and thickness. Because it contains a lot of neodymium and iron, it is easy to rust. Surface chemical passivation is one of the best solutions at present.

The relationship between magnetic steel performance and motor performance

For DC motors, under the same winding parameters and test conditions, the higher the remanence, the lower the no-load speed and the lower the no-load current; the greater the maximum torque, the higher the efficiency at the highest efficiency point. In the actual test, the level of no-load speed and the size of the maximum torque are generally used to judge the remanence standard of the magnetic steel.

For the same winding parameters and electrical parameters, the reason why the higher the remanence is, the lower the no-load speed and the lower the no-load current is, because the running motor generates enough reverse inductance at a relatively low speed. It generates a voltage that causes the algebraic sum of the electromotive force applied to the winding to decrease.

2. The influence of coercivity

In the process of motor operation, there is always the influence of temperature and reverse demagnetization. From the perspective of motor design, the higher the coercive force, the smaller the thickness direction of the magnetic steel can be, and the smaller the coercive force, the larger the thickness direction of the magnetic steel. However, after the magnetic steel exceeds a certain coercive force, it is useless, because other components of the motor cannot work stably at that temperature. The coercivity only needs to meet the requirements, and the standard is to meet the requirements under the recommended experimental conditions, and there is no need to waste resources.

3. The effect of squareness

4. The impact of performance consistency

Inconsistent remanence: It is not good, even if there are individual ones with particularly high performance. Due to the inconsistency of the magnetic flux of each unidirectional magnetic field segment, the torque is asymmetric and the vibration occurs.

Inconsistent coercive force: In particular, the coercive force of individual products is too low, which is prone to reverse demagnetization, resulting in inconsistent magnetic flux of each magnetic steel and causing the motor to vibrate. This effect is more pronounced for brushless motors.

Influence of Magnet Shape and Tolerance on Motor Performance

1. The influence of the thickness of the magnetic steel

When the inner or outer magnetic circuit is fixed, when the thickness increases, the air gap decreases and the effective magnetic flux increases. The obvious performance is that the no-load speed and no-load current decrease under the same residual magnetism, and the maximum efficiency of the motor is reduced. However, there are also negative aspects, such as the increased commutation vibration of the motor and the relatively steeper efficiency curve of the motor. Therefore, the thickness of the motor magnets should be as consistent as possible to reduce vibration.

2. The influence of the width of the magnetic steel

For the close-packed brushless motor magnets, the total cumulative gap cannot exceed 0.5 mm. If it is too small, it will not be able to be installed. If it is too large, it will lead to motor vibration and reduced efficiency. This is because the position and magnetic. The actual position of the steel does not correspond, and the consistency of the width must be ensured, otherwise the motor has low efficiency and large vibration.

3. The influence of magnetic steel chamfering size and non-chamfering

In order to give full play to the magnetic properties of various permanent magnet materials, especially the excellent magnetic properties of rare earth permanent magnets, and to manufacture cost-effective permanent magnet motors, the structure and design calculation methods of traditional permanent magnet motors or electric excitation motors cannot be simply applied. A new design concept must be established, and the magnetic circuit structure must be re-analyzed and improved. With the rapid development of computer hardware and software technology, as well as the continuous improvement of modern design methods such as electromagnetic field numerical calculation, optimization design and simulation technology, through the joint efforts of the electric motor academia and engineering circles, it has been widely used in the design theory. Breakthrough progress has been made in calculation methods, structural technology and control technology, etc., and a set of analysis and research methods and computer-aided analysis and design software combining electromagnetic field numerical calculation and equivalent magnetic circuit analytical solution have been formed, and are constantly improving.

3. The problem of irreversible demagnetization

Ferrite permanent magnet motors, especially miniature permanent magnet DC motors, have been widely used due to their simple structure and process, reduced weight, and generally lower total cost than electric excitation motors. Since rare earth permanent magnets are still relatively expensive at present, the cost of rare earth permanent magnet motors is generally higher than that of electric excitation motors, which needs to be compensated by its high performance and operating cost savings. In some occasions, such as voice coil motors of computer disk drives, the performance of NdFeB permanent magnets is improved, the volume and mass are significantly reduced, and the total cost is reduced. In the design, it is necessary to compare the performance and price according to the specific use occasions and requirements to decide the choice, but also to innovate the structural process and design optimization to reduce the cost.