Carbon-based nanomaterials such as carbon nanotubes (CNTs), fullerenes and graphene are of interest due to their unique physical properties. A new study explores the potential of hybrid nanostructures and introduces a new porous graphene CNT hybrid structure with significant thermal and mechanical properties.

This study shows how the significant properties of new graphene CNT heterostructures can be altered by slightly changing the intrinsic geometric arrangement of CNT and graphene as well as various fillers. 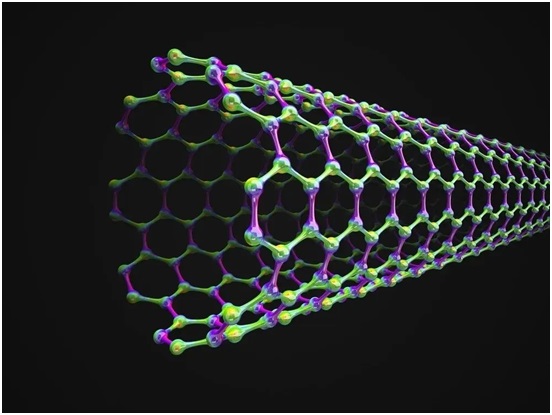 The ability to accurately control the thermal conductivity and mechanical strength in graphene CNT hybrid structures makes it a potentially suitable candidate for a variety of applications, particularly in advanced aerospace manufacturing where weight and strength are critical.

The most prominent carbon-based nanostructures studied appear to be CNTs, graphene and fullerenes. Due to their extremely small size, these structures exhibit unique thermal, mechanical, electronic and biological properties.

Structures measured in the sub-nanometre range operate according to the special laws of quantum physics, so they can be used to exploit non-intuitive phenomena such as quantum tunneling, quantum superposition and quantum entanglement.

Carbon nanotubes are tubes made of carbon and are only a few nanometres in diameter. Carbon nanotubes show remarkable electrical conductivity and some are semiconductor materials.

Due to their nanostructure and the strength of the covalent bonds formed between the carbon atoms, carbon nanotubes also have high tensile strength and thermal conductivity.

Carbon nanotubes are potentially valuable materials for electronics, optics and composites, and they could replace carbon fibres in the next few years. Nanotechnology and materials science are also using carbon nanotubes in their research.

Graphene is a carbon isomer in the form of a single layer of carbon atoms arranged in a two-dimensional lattice structure consisting of hexagons. 2004 saw the first isolation of graphene in a series of pioneering experiments by scientists Andrew Geim and Konstantin Novoselov at the University of Manchester in the UK, which won them the Nobel Prize in Physics in 2010.

In the decades since then, graphene has become a useful nanomaterial with extremely high tensile strength, transparency and electrical conductivity for a wide and diverse range of applications in electronics, sensing and other advanced technologies.

llerene is another carbon isomer that has been known for some time. Its molecule consists of carbon atoms that are connected by single and double bonds in a mesh that can be closed or partially closed. The mesh is fused to a ring of five, six or seven atoms.

Fullerene molecules can be hollow spheres, ellipsoidal, tubular or many other shapes and sizes. Graphene can be considered an extreme member of the fullerene family, although it is considered to be a member of its own material class.

In addition to the extensive research invested in understanding and characterising these carbon nanostructures individually, scientists are also exploring the properties of hybrid nanostructures that combine two or more nanostructured elements into one material.

For example, foams have adjustable properties that make them suitable for practical applications such as the design of sandwich structures, biocompatible designs and the design of high-strength, low-weight structures.

Carbon-based nanofoams have also been used in medicine to examine bone damage and as a basis for replacing bone tissue.

Carbon-based honeycomb structures are produced by chemical vapour deposition (CVD) and solution treatment. Spark plasma sintering (SPS) methods have also been implemented to use graphene for biological and medical applications.

Scientists have therefore been searching for ways to make three-dimensional carbon foam structures stable. Research has shown that stable connections need to be formed between different types of structures (carbon nanotubes, fullerenes and graphene) in order to make this material stable enough for a wide range of applications.

Porous graphene CNT structures are made by organising graphene around CNTs in nanoribbons. The different geometric arrangements of the graphene nanoribbon layers around the carbon nanotubes (square, hexagonal and diamond patterns) lead to different physical properties being observed in the material, suggesting that this geometric rearrangement can be used to fine-tune the new structures.

The researchers found, for example, that structures inserted with fullerenes exhibited significant compressive stability and strength without sacrificing tensile strength. The geometric arrangement of the carbon nanostructures also had a significant effect on their thermal properties.

The researchers say that these new hybrid nanostructures offer important advantages, especially for the aerospace industry. Nanostructures with these hybrid structures could also be used for hydrogen storage and nanoelectronics.